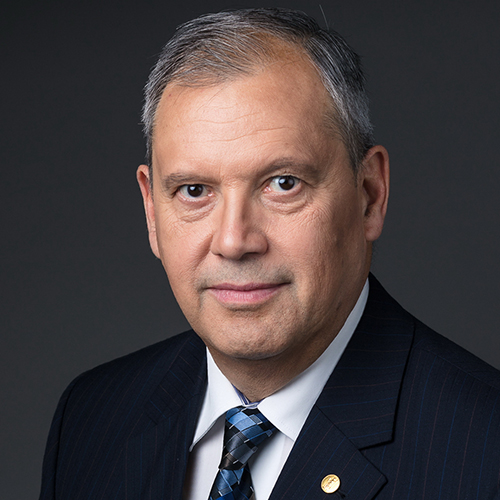 Dumitru-Dorin Prunariu accomplished an 8-day space flight on board Soyuz-40 spacecraft and Saliut-6 space station in May 1981. Prunariu is a member of the Board of the Romanian Space Agency and an expert with the Romanian Association for Space Technology and Industry – ROMSPACE. He is also a retired Lieutenant-General of the Romanian Airforce.

Prunariu is one of the founding members of the Association of Space Explorers (ASE) back in 1985. Between 2011 – 2014 Prunariu served as elected president of ASE International, serving also as president of ASE Europe between 2010-2016.  Since 2005 he has been a member of the ASE Committee on Near Earth Objects (NEO).

Since 1978 Prunariu was an active officer of the Romanian Air Force. For different periods of time Prunariu was detached within other ministries to perform civil functions.

In January 1990 Prunariu was assigned the position of Deputy Minister to the Ministry of Transportation and Chief of the Romanian Civil Aviation Department, exercising this position for 1.5 years. In 1991 Prunariu graduated from the International Aviation Management Training Institute (IAMTI/IIFGA) located in Montreal, Canada. Between 1992 and 1993 Prunariu was a Co-leader of the World Bank Project on reorganization of the higher education and research system in Romania. Since 1995 Prunariu has been acting Vice-President of the European Institute for Risk, Security and Communication Management (EURISC) based in Bucharest. Between 1998 – 2004, he was the President of the Romanian Space Agency. Starting with 2004, he served for almost two years as the itinerary Ambassador Extraordinary and Plenipotentiary of Romania to the Russian Federation. Prunariu was the elected chairman of the United Nations Committee on the Peaceful Uses of Outer Space (UN COPUOS), holding this position between June 2010-June 2012.

Prunariu is a full member and trustee of the International Academy of Astronautics, since 2011 is a Honorary Member of the Romanian Academy, and since 2015 a member of the European Academy of Sciences and Arts. In 2012 he was appointed as one of the 15 experts of the Group of Governmental Experts on outer space transparency and confidence-building measures (TCBM), established by the UN General Assembly Resolution 65/68. For a mandate, since 2014 until 2017 Prunariu used to be the vice-chair of the International Relations Committee of the European Space Agency (ESA).

Prunariu was also a member of the task force elaborating a report on Space Security for Europe in the framework of the European Institute for Security Studies (EUISS), issued in 2016.

Prunariu is a co-author of several books regarding space technology and space flight, has published numerous scientific papers and delivered a large number of scientific lectures to audiences all around the world. He earned a degree in aerospace engineering from the University POLITEHNICA of Bucharest (1976) and a Ph.D. in the field of space flight dynamics (1999). Prunariu is a Honorary Citizen of several cities and Doctor Honoris Causa of several higher education institutions from Romania, Republic of Moldova and USA.

In 2017 an asteroid was given the name of the first Romanian cosmonaut, respectively “Asteroid 10707 Prunariu”.